I have news for the world.  Sylvester Stallone can act!

I’ll just run that by you again.  Sly is more than big biceps and a sneer.  Both he and Schwarzenegger have astounded us all by transcending their muscle-bound, monosyllabic images and developing into genuine actors with considerable charm.

‘Oscar is a farce set in 1931, sort of Damon Runyon meets Feydeau,’ according to director John Landis.  ‘I shot the picture in a deliberately stylised manner, attempting a thirties Hollywood comedy look and feel.  The film is directed as if it were a film of that time, with humour and dialogue delivered in a manner reminiscent of old Hollywood comedies, particularly the ‘screwball’ genre.’  Possibly this was the problem for some of the more waspish critics.

I’ve been a fan of Arnie’s since Conan, but had never been very keen on Mr Stallone, thinking that Rocky was all he was capable of.  I was later quite impressed with his performances in Judge Dredd and Cliffhanger, but the film that did it for me was a rather obscure comedy called Oscar.  I can’t remember now how I came across this little gem, and I don’t know why it hasn’t received better reviews, but it held me spellbound and beaming all the way through.  Based on the Claude Magnier stage play, it is a remake of the 1967 French film of the same name, but the setting has been moved to the Depression era New York City and centres around a mob boss trying to go straight.

It begins with Stallone as the gangster, ‘Snaps’ Provolone, being summoned to the bedside of his dying father (Kirk Douglas) and made to promise to go straight.  Snaps, in his own way, is a man of honour, and determines to keep his promise, against mounting odds.  He arranges to pay a substantial sum to a banking firm if they will take him onto the board of trustees, but on the day of the crucial meeting, the police and a rival gang decide to swoop on his mansion.  The plot is true farce, and you just have to accept it as such and go along with all its comings and goings, mistaken identities and frequently-exchanged bags.  It’s quick, slick, beautifully presented and exquisitely choreographed, with spot-on costumes and hairstyles, and some charismatic performances, not least from Stallone himself.

He plays the father of a spoiled daughter (Marisa Tomei) who is dying to leave home and sees marriage - to anyone - as the only way out, and he plays it with charm and confidence, leaving you gasping with admiration as he struggles to keep control of events.  Both he and Schwarzenegger were at their peak at this time and revealed an unexpected flair for comedy and a deal of personal magnetism.

Of the rest of the cast, it’s hard to recommend one more than another.  I particularly like Martin Ferrero and Harry Shearer as the Finucci brothers, Provolone’s tailors, who move as one and are so proud of their work that all they see in a photograph of a murdered gangster is the quality of the suit they made for him.

This is a film I can watch over and over.  You can buy it on Amazon for well under a fiver, and it’s a total bargain, but if you’re really cheapskate, you can get it on You Tube.  But who wouldn’t want their own copy, to watch from the comfort of their sofa on a chilly winter evening with a nice Italian? 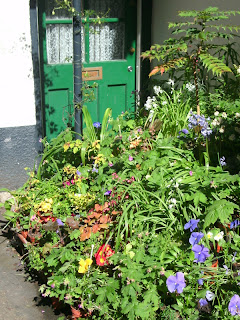 I’m used to bigger, of course; my previous garden was seventy five feet long and I worked every bit of it, from the rockery near the French door to the soft fruit and compost heap by the shed at the end.  Gardening is one of those jobs which is never done, no matter how much time you devote to it; I’d go outside on a Sunday morning to plant the sprouting potatoes from the bottom of the vegetable rack and not come in till tea time.  I don’t know how I did it, with a full time job, which is probably why when we moved to a cranky old town cottage near Exeter that had no garden at all, I thought I wouldn’t mind giving it up.  I didn’t think I’d miss it.  There was a garden round the back which belonged to next door and was nice for the cats to enjoy the sun, but that was all.
But gardening is as addictive as nicotine.  A gardener must grow, and a cottage without flowers is unthinkable, so one day, I put a pot of traditional red geraniums outside the front door.  It looked nice and bright, so presently I added a few more.  The adjoining house had been empty for some time, but as soon as Soo moved in and put a flower pot of her own outside her door, a garden mysteriously began to grow.  We became guerilla gardeners.  If you’ve never heard of them, they are people who make a garden on a piece of land that doesn’t actually belong to them – motorway verges, waste ground and, as in our case, part of the street.
We found that simply occupying the ground wasn’t enough – we had to go higher.  At least, I did.  Soo was happy to remain at ground level, but I started stacking pots on top of more pots and paint tins and biscuit tins, and eventually got Ray to install a long shelf at the back for greater height. 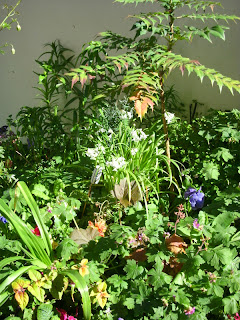 Soo and I have very different gardening styles.  She is tidy and her plants are never more than twelve inches high, whereas I believe that more is better, so I have masses of leaves for my plants to grow through and some of my lilies and Japanese anemones are nearly as tall as I am.  I always over-buy and have to pack plants in as tightly as they will go, so they don’t all survive, but nature does her best in spite of me.  It’s an amicable arrangement and our differing styles work well – Soo’s low-lying garden leads the eye up to my over-abundant foliage in a pleasing sweep.
We are not greatly adventurous in our choice of plants.  We’ve tried all sorts over the years, but the road is narrow and consequently only gets a couple of hours of sunshine per day.  On breezy days,  it’s like living in a wind tunnel, so they have to be good survivors to live there.  Mostly we stick to what we know will grow and not disappoint us - begonias, pansies, geraniums and until its recent decline, the radiant busy lizzy - with only the occasional foray into something a bit exotic.  Our pineapple lilies were a great success and attracted considerable attention.  I’m a big fan of lilies.  I always thought they would be too delicate for my ham-fisted methods, but they are the easiest and most delightful plants in the world – put them in, watch them grow - and look spectacular. 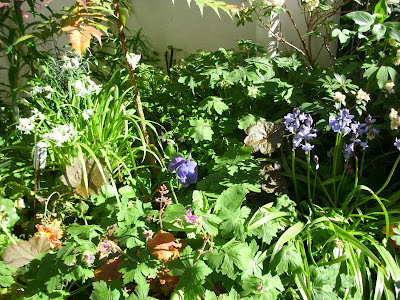 ‘Our estate’ takes more maintenance than you’d think.  As with all gardens, there’s always something that has to be cut back or has grown too tall and needs moving, or a gap that has appeared and needs another plant.  Even watering takes a while, and washing up and vegetable cleaning water gets thrown onto it.  The biggest problem is the slugs.  They love the haven provided by all the pots and I fear I have to waive my principles and use pellets when they get too rapacious and eat something I’ve only just put in.
Twice a year we have a mighty Sunday clear out.  It has to be a Sunday, because once you’ve got everything spread across the road, you don’t want someone deciding to get his car out.  In early spring we take out all the dead plants and replace them with bulbs, and when they’re finished, they come out to make way for the summer flowers.
We started out just doing it for ourselves, but then people began to admire it, so we tried that little bit harder, and I have to say, from spring onwards, it does look rather nice.  It’s only a few feet away from the main road, and people regularly stop and take photographs.  We can see them from our window, pointing and snapping, and once even had a lady standing in front of our door to have her photo taken.  I like to think that there are pictures of our garden all over England, and who knows, maybe the world.  We never get tired of the gratification it gives us, and the friends it makes us as people go by; some people make detours just to come and see it.  Topsham is very keen on its gardens and the bigger ones are open to the public in the summer.  Ours, we say proudly, is open all year round and it’s free.
When we lived in suburbia, gardening was a solitary pursuit conducted in secrecy behind well-trimmed hedges, but having an open garden in a small town means that you’re constantly stopping for a chat.  We’re often asked if the garden gets vandalised.  The answer to that is, ‘Not yet,’ which is surprising, considering how easy it would be.  We get small gangs of inebriated young men coming up the road from time to time who I’m sure occasionally relieve themselves on it, and I once caught one making off with a surfinia for reasons of his own, but on the whole they leave it alone.
I have a book called The Small Garden, which has nice pictures and good ideas, but the author and I differ on what is ‘small.’  He seems to mean something not quite as big as Hidcote, with room for decking, ponds, pergolas and a water feature.  I should like him to come and see ours.  Perhaps he might revise his ideas of what a really small garden is.
1 comment: