Clothing is integral to The Admirable Crichton. Barrie's notes to the play say at the outset:

We have had misgivings ever since we found his name in the title, and we shall keep him out of his rights as long as we can. Even though we softened to him he would not be a hero in these clothes of servitude; and he loves his clothes. How to get him out of them? It would require a cataclysm. To be an indoor servant at all is to Crichton a badge of honour; to be a butler at thirty is the realisation of his proudest ambitions.

That cataclysm happens, and the radical change of clothes goes with the radical change of social roles. For the island costumes, I had in mind Mad Max and Waterworld, clothing made from whatever scraps came to hand. I asked the cast to think in terms of "bare as you dare", and two of the male leads had nerve enough to wear thongs in the island scenes (hence the reviewer's comment about "brave and unusual costumes"). Even on their return, however, I had in mind costumes showing that the island had changed some of the characters: in the final Act, the originally idle Agatha and Catherine's dresses had been replaced by practical and sporting outfits. 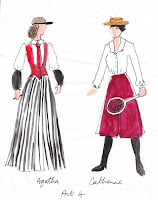 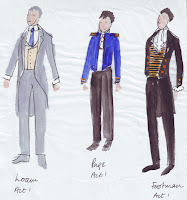