In 2002 I directed JM Barrie's The Admirable Crichton (a directorial debut) for the amateur dramatic company ELTC (Exeter Little Theatre Company). It was staged at the Barnfield Theatre, Exeter, as part of the annual Exeter Festival.

My thanks to all - both cast and production team - who worked extremely hard on a play that's difficult to stage due to its large cast and its major set and costume changes.

I decided to write up my staging notes as possible guidance for others considering putting on the play.

Lord Loam, a turn-of-the-century English aristocrat, pays lip-service to social equality. He promotes his views by tea-parties where servants and aristocrats mingle (to the embarrassment of all, and the disapproval of his butler, Crichton, who believes in the class system as a natural hierarchy). On an ocean cruise, Loam and his retinue are shipwrecked on a tropical island. There both men are proved wrong: the society that naturally forms there isn't egalitarian, but nor is the class system preserved.

In fact Crichton rises to become a resourceful but autocratic leader of the castaways. Lady Mary, Loam's daughter, falls in love with him, forgetting her engagement to Lord Brocklehurst at home. Just as she and Crichton are about to be married by Treherne, a clergyman shipwrecked with them, a rescue ship arrives. They return to England, and the Loam household reverts uneasily to its earlier hierarchy - until outsiders begin to ask questions about what really happened on the island ... and indeed, what did? 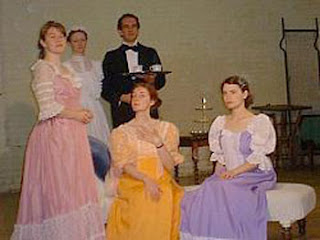 The production received a good review from David Marston, the Exeter Express & Echo critic: "This production from Exeter Little Theatre Company sets a high standard as it moves from a 1900s drawing room to a distant tropical island - featuring some of the most brave and unusual costumes seen on the Barnfield stage for some time ... The big cast is led by Mark Norman as Crichton who has great physical presence ... Jacqueline Cooper is splendid as Lady Mary. Also good are Adam Owen-Jones and David Hill, who really embraced their parts. Director Clare Girvan has grabbed this piece with gusto and her atmospheric music is particularly good."

Although it could be accused of being a period costume comedy satirising virtually obsolete class roles, I think Crichton has plenty of modern resonances: the relationship between a couple mismatched by class is a staple of cinema (e.g. The African Queen) as is the idea of social upheaval or isolation altering the pecking order of civilised society (e.g. the savage boys in Lord of the Flies; or Mad Max III, where Tina Turner plays 'Auntie', the leader of a rebuilt community, who was just a waitress before the apocalypse). Crichton is not entirely a 'safe' light comedy, and even has thematic resonances with a far darker play, Strindberg's 1888 Miss Julie, "a quasi-Darwinian struggle across sex and class lines" between a Count's daughter and the valet of their household.

As to the interpretation, many recent productions have interpreted Crichton not strictly 'by the book'. Some, for instance, have introduced JM Barrie to narrate his own footnotes, even interacting with the other characters. The set design for the island is rich in possibilities. Crichton, as Barrie's title says, is a fantasy. The script tells us he has built a sawmill and a blacksmith's forge, and installed a speaking tube, electric lighting and a 'signalling device', etc. "We are not told," the editor of the Sangam Books edition notes, "how all this was achieved in just two years" with recourse only to salvaged materials. What else might Crichton invent? 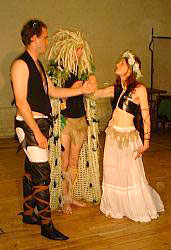 It's also food for thought that the Crichton we are familiar with is a bowdlerised version. One example is in Act 3. Originally on cost grounds, we used the Indian-published Sangam Books edition, and were surprised to find differences between this and the standard Samuel French acting edition, which most amateur theatre companies use. The latter has an exchange between Crichton and Lady Mary that runs:

Crichton: "Dear Polly, I have grown to love you; will you let John Treherne make us man and wife?"
... [Crichton takes her hand and kisses it with emotion - and reverently. There is a pause. He crosses and sits in the chair and motions her to sit on the ground in front of him. She does so.]

In the original Barrie script, findable via Project Gutenberg or the Sangam Books edition, this same scene runs:

Crichton: Dear Polly, I have grown to love you; are you afraid to mate with me?
... [He takes her to him reverently. Presently he is seated, and she is at his feet looking up adoringly at his face]

Even in 1900, "to mate with me" was a double entendre, and the editors at French clearly felt the need to expunge the implication of a sex scene.

I decided to go with this implication - decently screened by one of Crichton's devices literally drawing a curtain over the scene - and with the spirit of Robinson's Eiland, the play that is claimed to have inspired Barrie's Crichton. In this, the hero returns to his island with the niece of his employer. In contrast, the ending of Crichton is deeply downbeat: Crichton announces that he is leaving service; "Tweeny" (who loves him) remains unhappy; and Lady Mary (who also loves him) resumes her engagement to an aristocrat who has been unfaithful in her absence. In the original version of the play, Crichton announced his plan to marry Tweeny and establish a public house called "The Case is Altered" (the working title of the play) but Barrie altered this after World War 1. 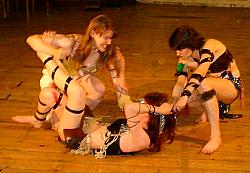 While sticking to the rules of not altering the text, I concluded the final scene to make it both upbeat and resolve the emotional triangle, by Crichton being robed again in his lordly cloak and both women leaving with him in an implied polygamous arragement. Staging also subverted the text in other minor ways: for instance, in the fourth act, to show the order hadn't been entirely restored, I had the Loam daughters in more emancipated clothing and one of them drawing a suffragette poster.

The staging of The Admirable Crichton can be fairly difficult. It needs a large cast, which we managed to obtain by running it as a community play - i.e. one recruited openly, rather than entirely within the company hosting it

Also, the four acts take us to an English stately home; a deserted tropical island; the same island developed through Crichton's industry; and back to the stately home. This involves major scene changes.

See the Costumes page and Sets page for more on this aspect.

I was very pleased to have found the music of the Penguin Cafe Orchestra, best known for their track Music For A Found Harmonium. Their album Broadcasting from Home had a particularly atmospheric set of pieces that perfectly conveyed the varying moods of the play: for instance, the wistful Isle of View (Music for Helicopter Pilots), the busy White Mischief, and the stark Air, which I used for the play's central emotional scenes. Music from a different group, Sky's Carillon, backed the final scene, its crescendo corresponding to the sudden reversal from sad farewells into a triumphant exit.

JM Barrie (Sir James Matthew Barrie) is, of course, best known as the author of Peter Pan. The title refers to the nickname of James Crichton, a 16th century Scottish genius and athlete. The epigram-loving Ernest is probably a caricature of the hero of Oscar Wilde's The Importance of Being Earnest. The plot may well derive from Robinson's Eiland, an 1896 German play by Ludwig Fulda. In this, Arnold, a humble secretary, emerges as the natural leader of a shipwrecked party of officials, and is pronounced Prince of Robinson's Island. (Carl Markgraf's 1989 J.M. Barrie: An Annotated Secondary Bibliography suggests Fulda, in turn, may have been influenced by Tom Taylor's desert island play The Overland Route).

The Admirable Crichton was first performed in 1902, and has since been made into two major films: before the well-known 1957 one starring Kenneth More, in 1919 Cecil B DeMille filmed it as Male and Female, featuring Gloria Swanson and a live lion (a fantasy scene that perhaps over-literally interpreted Crichton's quotation from William Ernest Henley's poem To W.A. - "I was a King in Babylon / And you were a Christian Slave"). Via the films and play, Crichton has entered the language as the archetypal butler, even appearing in the guise of Kryten, the robot butler in the science-fiction comedy Red Dwarf.

If you have any questions about the production, feel free to contact me.

The play requires Lady Mary to bring back a buck she has hunted; I have already lent ours (a lovely stuffed-toy-style prop made by a textile crafting colleague) to a couple of productions.